in a garden-like meditative setting 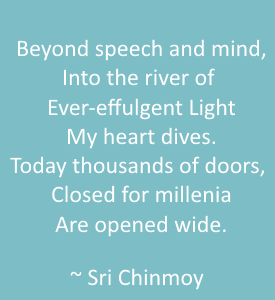 The Sri Chinmoy Poetry Festival is a real festival traditionally held in the summer in New York City. The first Festival was held in 2009.  Its focus is the spiritual poetry of the great “student of peace” for which it is named, but it includes a broader exploration of life through the arts which is continued on this website.

Sri Chinmoy was a mystic poet, artist, musician, composer and sportsman. Born in India in 1931, he made his home in New York beginning in 1964, and began conducting twice-weekly meditation sessions at the United Nations at the invitation of then Secretary-General U Thant in 1970.  He wrote prolifically in both English and his native Bengali, with many of his lyrical English poems being his own translations of the Bengali, which he also often set to music. In rhymed and free verse, Sri Chinmoy breathtakingly captures the experiences and explorations of the truth-seeker.